The BSF breeding season has ended where I live so I’m no longer able to collect multi-stage kits until next spring.

If you’re lucky enough to have a known BSF population on your property then the kit will not make a significant difference. You may live in an area where wild black soldier flies (Hermetia illucens) are present in moderate numbers and you want to speed up the process of establishing a colony. A starter kit could be helpful in that case.

If you live in a region where BSF are not already present then the kit cannot guarantee you will establish a colony. A BSF unit relies on a free roaming population of adults because mating can’t take place in the confines of such a container. In the absence of an existing BSF population you must establish these “wild” BSF on your property.

In general the warmer and wetter your climate, the more likely it is that you already have black soldier flies in your area. Colder and drier climates represent the least likely places to find BSF and they are the most challenging places to establish a colony. This is also true of elevations over 5000 feet (1500m). The native range of BSF is the southeastern U.S. but over time they have been transported around the world. BSF are most commonly found in the USDA plant hardiness zones 7 – 10.

The black soldier fly starter kits that I’ve seen for sale are made up of only juvenile (light colored) grubs. An all-juvenile kit is relatively quick and easy to collect and package, but I don’t believe it represents the best strategy for establishing a colony. Our kit is made up of three different stages in the life cycle of the black soldier fly; eggs, juvenile grubs and mature grubs (pre-pupae). I believe that starting out with more than one stage of development helps “jump start” the life cycle in a way that depends less on a local BSF population. Our kit is a bit more complicated than an all-juvenile kit, but the learning process involved in implementing it will be a good introduction to the basic knowledge needed to operate a BSF colony successfully.

This is the stage that is famous for being waste-eating machines. The juvenile grubs (tan color) will begin eating the food waste you provide immediately when you add them to your BioPod or homemade BSF unit. As they eat they emit chemicals that serve to attract any nearby adult BSF females searching for a suitable egg laying site. This attraction is the key to any starter kit and ours is designed to maximize the presence of juvenile grubs by introducing  them in various ages as well as BSF that are just a few days old which will hatch from the included eggs.

The juveniles also emit chemicals that repel houseflies, fruit flies, etc, but the number of grubs in a starter kit will not produce a sufficient amount for the repellent effect. Your juvenile grubs will most likely share the BioPod with other fly species until the BSF are well established. You can minimize the reproduction of other fly species by covering the food scraps with an inch or two of shredded office paper (not newsprint or glossy). You can also avoid attracting many species of pest flies by not adding meats, poultry or fish waste at first, but you can process these products after establishing your colony.

One common mistake is adding too many food scraps to the BioPod initially. The grubs included in a starter kit are only capable of consuming a few ounces of food per day. A total of a few pounds of scraps is plenty in the beginning, you can gradually add more as needed. The result of adding too many food scraps initially is that you will end up with a lot of mold and fungus before the grubs can process everything. The mold/fungus won’t hurt the grubs, but it makes the process less pleasant for the operator. A certain amount of decomposition is actually good for attracting BSF, the issue is controlling the amount and this is best done by starting out small and adjusting as needed.

You should not remove any food scraps from the BioPod after installing the starter kit because the assumption has to be that grubs are present in any and all scraps. This is true of the juvenile grubs and eggs you’ve added, but you must also assume that some local BSF adults have succeeded in finding your BioPod and have laid eggs in the unit. The resulting grubs could be anywhere in the food scraps and are so tiny at first that they are difficult to see without magnification.

The mature grubs are almost black in color and are called pre-pupae because this is the last stage before they pupate. When a BSF grub transforms from juvenile to mature it changes in important ways other than just color. In the prepupal stage the grubs do not eat so they don’t develop a mouth. In place of a mouth they have a hook-like apendage to aid crawling as they migrate away from the food source in search of a protected place to pupate. The self-harvesting aspect of BSF is a result of this migration. Mature grubs will circle the edges of the BioPod, eventually finding a ramp. At this point they climb the ramp and drop into the collection bucket. An inch or two of sawdust (not pressure treated), peat or rice hulls will keep the grubs in a semi-dormant state. They can remain in the collection bucket for several days without any attention.

The BioPod egg disc is made of corrugated plastic. BSF eggs take about 4 days to hatch and the voids in the disc provide the type of protected niche that the egg laying females seek out. The introduction of very young grubs ensures that there will be actively feeding BSF in the BioPod for 2 – 3 weeks after the initial batch of juveniles (included in the kit) have matured and self-harvested. As previously stated, the presence of actively feeding grubs is the most powerful way to attract egg laden female BSF.

Installation of the kit

If your BioPod is currently empty or almost empty you might consider lining the bottom of the main compartment with one inch (25mm) of coconut coir. It is reported to aid in keeping the drain of the BioPod open and it may also help maintain a humid environment. Coir is the fiber from the outer husk of coconuts and it the most common material used to line wire baskets for hanging plants.

The bag of grubs:

The kit includes a large plastic bag with a combination of mature and juvenile grubs (small and large) and a small amount of bedding material. Simply empty the grubs and bedding into your BioPod or DIY unit. The juveniles will begin eating and the mature grubs will soon migrate out of the main body of the BioPod into the collection bucket. The bedding is a combination of sawdust (not pressure treated) and BSF castings and it contains the scent that serves as a powerful attractant to female BSF seeking an egg laying site.

Due to the time it takes for shipping, the eggs in our kits have often hatched by the time they are received or they will hatch within a day or two. Either way, the installation is the same. The eggs are packaged in a small plastic container with a snap-on lid. Do not remove the lid. The tiny grubs are very prone to dehydration and the hatchery protects them. The lid has a slit in it which has been sealed with clear packing tape. Remove the packing tape and place the container upside-down in the BioPod on an area of fairly fresh and moist food.

Avoid placing the egg container on food that is wet or sticky that might create an airtight seal between the inverted container and the food, the grubs need air. A thin layer of shredded office paper, shredded cabbage, or carrots, etc,  will prevent a seal.

The tape which covered the slot on the lid may have tiny BSF on it. If this happens gently rinse them into the BioPod with a few drops of water.

The egg container is shipped with a small quantity of food in it and several grubs may stay inside for many days. The container should be left in the BioPod for at least two weeks for this reason. You may rinse the container with a little water before permanently removing it.

As the grubs mature:

The dark mature grubs will gradually accumulate in the collection bucket. In an established colony you could feed these grubs to pets, livestock or wildlife, but when starting a new colony they must be allowed to pupate into adult form (winged stage) and mate. The BioPod is not a closed system which means that the adult BSF are released so they can mate outdoors and then return to the BioPod to lay their eggs.

A BioPod™ at full capacity will have enough grubs in it to cover the surface area with few inches of solid grubs, maybe more. Until you achieve that density you should focus on building up the colony. I don’t recommend feeding any mature grubs to animals until you completely establish the colony. Each pair of BSF that you sacrifice represents 500-900 eggs that might have been laid in your unit. I also don’t recommend scattering the mature grubs while building up a colony.  I think it’s best to protect every mature grub until your colony is at capacity.

If you scatter the collected mature grubs on the ground near your BioPod that leaves them vulnerable to the many predators that target insects. It’s fair to assume that only a small percentage of released grubs will survive to become adults. It’s best to keep the mature grubs in a container such as a bucket with a lid to protect them. The container needs to have several holes with a diameter of at least 3/4  inch to allow the emerging adults a way to escape. The holes will also provide necessary air for the pupating BSF and also aid in keeping the temperature regulated. Like the BioPod, the prepupae container must be completely shaded and protected from rain. Adding an inch of bedding material such as sawdust (not pressure treated), peat, etc to the container will encourage the grubs to pupate, but it must stay dry and loose so the emerging adults can climb to the surface.

If you see dark grubs that seem stiff and aren’t moving do not assume they’re dead. What you’re probably looking at are pupating BSF. The video below will give you an idea of what the pupae look like, and how fast they emerge. 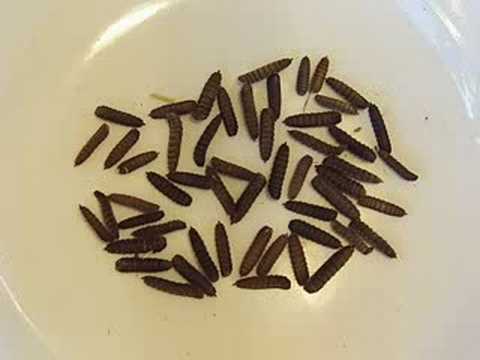 I hope I haven’t made bio-composting with BSF sound overly complex because in reality black soldier flies are very adaptable and forgiving.